Parkrun - no sun and no fun; Thinking about visual schedules

I woke up and for the first time on a Parkrun morning it was cloudy!.  Woohoo I thought, its going to be SO much easier today. Ummm...wrong.  I felt like I was running in a sauna.  I have real trouble pacing myself on these Parkruns and I think I might have to get my old Garmin going.  I decided to tag  this lady who overtook me (how dare she!) and see how long I could stay with her.  I hope I didn't tick her off too much because she overtook me pretty quickly and I stuck to her like glue for the first couple of kms.  Then I blew up a little and she sped away.  Unfortunately, not a PB today.  Man,  I really want to get faster. As soon as I finish my Lazyrunner program I'm going to start doing some speed work.

Then I got home and took the boys to the park.  Dragging T2 away from Ben and Holly's Little Kingdom took some food bribery of a little picnic at the park.  Also, when we got to the first park where we usually run around there was cricket going on.  T2 wanted to run through the cricket and started to play up, then T1 decided he wanted to go home. Aaah.  Initially I started to lose my temper, but I worked on staying calm and speaking without any frustration in my voice.  It worked!  We ran/scootered/walked to the park where T2 demanded his promised picnic while T1 and I played on the equipment.

I haven't been pushing T2 since he started school.  Yesterday, when I picked him up he had tears streaming down his face.  Has the novelty of school worn off already?  I hope not!  His shadow said he had hit his head about half an hour before hometime and was upset after that.

Next week's mission is trying to get T2 on some kind of schedule so that he is using his time appropriately after school. 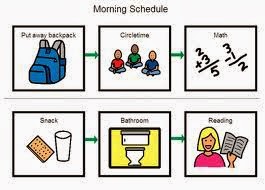